Leaders, like media outlets, are a distribution point or “Source” for good info or bad info. Truths or Untruths. Good influences or bad influences.

For much of our last 50 years in American Politics, we have not always chosen men and women of great moral character to lead us. We sometimes just want a better economy, or less taxes or better roads, and we don’t care who gets us there. When we’re fed up with the “status quo”, the American people have proven that they will do pretty much anything to get what they want. And we reap the consequences of those votes.

So, I started to think about our most recent choices, and then I asked myself, I wonder what the Scriptures would say? And not just of Presidents, but leaders in general. What are the traits that God is looking for, as HE evaluates leaders? Because the importance of who our leaders are, is highlighted by the truism that “People not only follow their leaders, they emulate them”. As the leader goes, so goes the people. I looked back in the Old Testament, and saw that even though Israel had some high character prophets, men of great moral fortitude, they got sick of the “same ol’ thing” and said “we want a king like the rest of the nations”. Essentially, “we want what we want and we want it now”. Doesn’t sound dissimilar to what we were feeling only 5 or 6 years ago. Here’s a recount of that story:

“When Samuel became old, he made his sons judges over Israel. … Yet his sons did not walk in his ways  but turned aside after gain. They took bribes and perverted justice.

Then all the elders of Israel gathered together and came to Samuel at  Ramah and said to him, “Behold, you are old and your sons do not walk in your ways.  Now appoint for us a king to judge us like all the nations.” But the thing displeased Samuel when they said, “Give us a king to judge us.” And Samuel prayed to the LORD.  And the LORD said to Samuel, “Obey the voice of the people in all that they say to you,  for they have not rejected you,  but they have rejected me from being king over them.  According to all the deeds that they have done, from the day I brought them up out of Egypt even to this day, forsaking me and serving other gods, so they are also doing to you.  Now then, obey their voice; only you shall solemnly warn them  and show them the ways of the king who shall reign over them.” (1 Sam 8:1-9)

So, I did some research and came up with the biblical characteristics and traits of good leaders and bad leaders. And then I chose two of our Presidents, and measured their commonly accepted traits against those of the Bible. I came up with 6 pages of traits, and then narrowed them down to only two pages. I then put them in four columns, side by side, and let the Scriptures evaluate them. 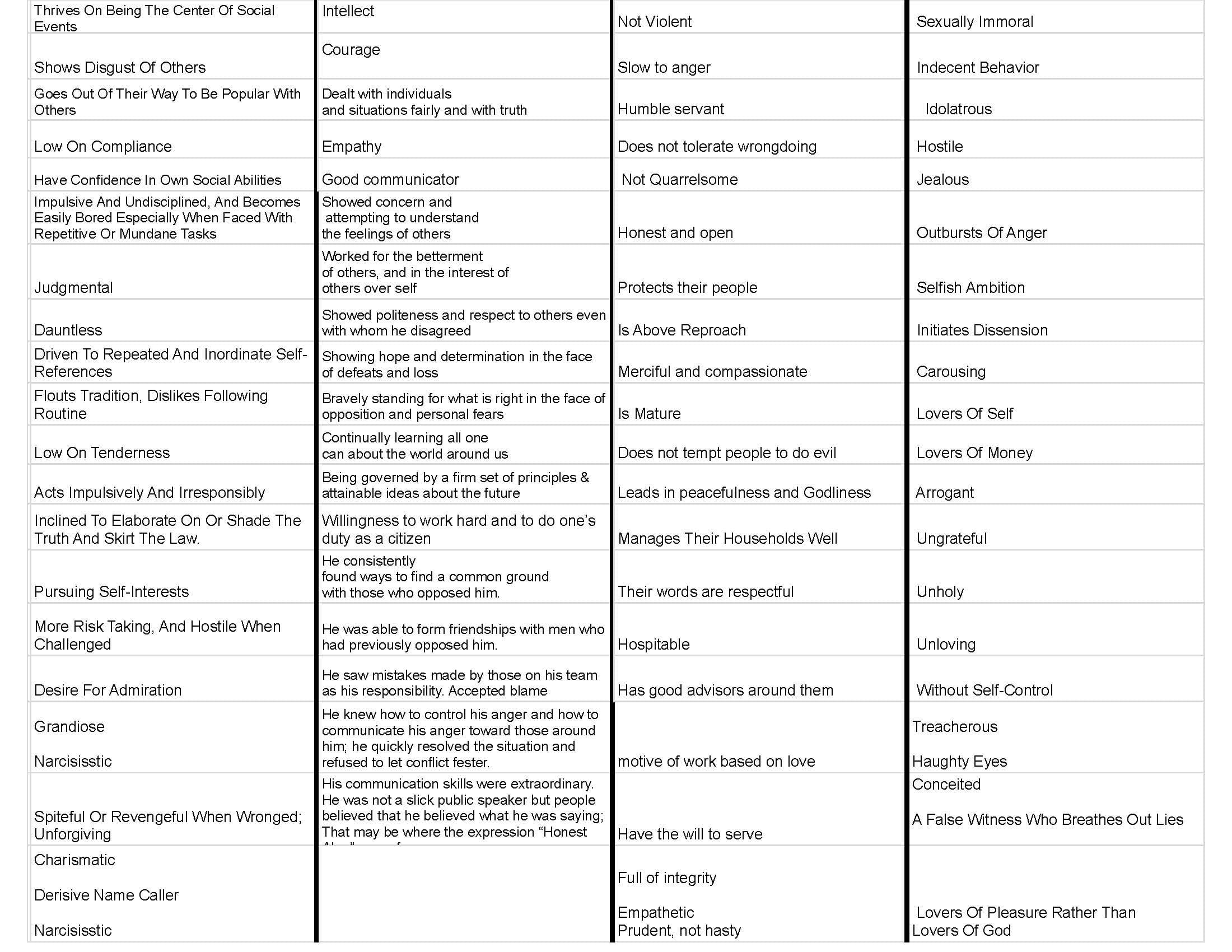